SHAN SHAN CHEN joined the program in 2013 after her residency training in Saint Agnes Hospital at Baltimore, MD. Because of the intensive training offered in both clinical and research aspects of UPMC, she joined the team as a Renal Fellow. Soon after, she found herself in a conducive learning environment surrounded by friendly colleagues and supportive stuffs. With the help of great mentors, she engaged in clinical research focused on prevention of peritoneal dialysis related infection as well as renal transplant and health care quality improvement. She also completed an EMBA in University of Pittsburgh during her years as a clinical fellow. She is now continuing her career at Division of Nephrology, University of New Mexico as an Assistant Professor. She likes to spend time with her son, Aaron in her free time. 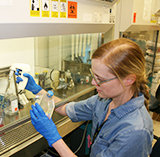 CARY BOYD was born and raised in sunny Phoenix, Arizona. She earned her undergraduate degree in Physiology at the University of Arizona and then went on to pursue her Ph.D. in physiology at Dartmouth Medical School. Her thesis research focused on mechanisms of sodium transport. After completing her Ph.D. she moved to Pittsburgh in 2007 to attend medical school at the University of Pittsburgh, and has been here ever since. She now considers herself a “Pittsburgher” and even owns a Steelers jersey. After moving to Pittsburgh, she met her husband in the laboratory while he was studying chloride transport and she was studying sodium transport. They have a daughter named Piper. She is currently studying the kinase WNK1 and its regulation of sodium transport in the kidney. Her future goals are to become an expert in the clinical management of hypertension and electrolyte disorders, as well as a scientist discovering the molecular mechanisms of hypertension. Currently, Cary is an Assistant Professor of Medicine in the Renal-Electrolyte Division. In her free time Cary enjoys collecting state quarters, drinking iced lattes, and reading books to her daughter, whereas she tries to avoid cooking dinner, running marathons, and cold weather.

BILL HOFFMAN came to the University of Pittsburgh and UPMC in 2013 for the Renal Fellowship Training Program. He was interested in a career in academic medicine and looking for a program with a strong clinical focus and also options for further training. At UPMC, he found a supportive environment with wonderful faculty, and a diverse range of opportunities for research and master’s programs. He completed the Transplant Nephrology Fellowship at UPMC in 2016. Dr. Hoffman was the 2016 recipient of the ASN Ben J. Lipps, Grantham Research Fellowship and currently works at UPMC Pinnacle as a renal transplant surgeon.  His main interests are in translational research including characterizing memory B cell activation and its relationship to acute transplant allograft rejection. Outside of the hospital, he is busy with three small children.