Dr. Ray’s overall research interest is to understand mechanisms of immune tolerance versus inflammation in the lung as they relate to pulmonary diseases such as severe asthma and host-pathogen interactions. Early research from her lab led to the identification of NF-kB as a target for glucocorticoid-mediated repression of gene expression and the discovery of GATA-3 as a master regulator of Th2 cells, which promote allergic diseases including asthma. Her laboratory also identified a key role for Tregs expressing membrane-bound TGF-b with cross-talk with the Notch pathway in promoting immune tolerance in the airways.

The primary goal of Dr. Ray’s current research is to understand interactions between dendritic cells (DCs) and T helper cells that either promote diseases such as asthma or suppress disease involving tolerogenic mechanisms. Ongoing work in her lab has identified an important role of mitochondrial metabolism in immune tolerance. Asthma is a heterogeneous disease with multiple sub-phenotypes.  The most severe form of the disease poorly responds to standard therapy and is the least understood mechanistically. Recently, in a collaborative study between her lab and those of Drs. Sally Wenzel, Prabir Ray and Jay Kolls, an IFN-g/Th1 immune bias was demonstrated in the majority of severe asthmatics. This study also utilized a newly developed animal model of severe asthma established in her lab. The animal model can now be used to test novel therapeutics. This bedside-bench study has shown a detrimental role of IFN-g in downregulating expression of an important protease inhibitor, SLPI, in the airways of both humans and mice.  In ongoing studies, her laboratory is also investigating the molecular mechanism underlying corticosteroid unresponsiveness in severe asthma. In the area of mucosal defense mechanisms against infectious agents, in collaborative studies between her lab and that of Dr. Prabir Ray, for the first time a pathogen, respiratory syncytial virus, was shown to disable Tregs in early life thereby compromising immune tolerance and increasing the risk for asthma in later life.  Studies in her laboratory employ animal models of disease and human samples, which are analyzed using immunological, molecular, biochemical, physiological and imaging techniques.  Her research has been continuously funded by multiple grants from the NIH. 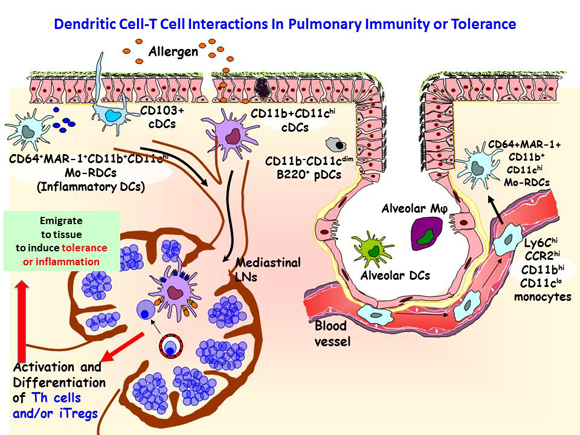 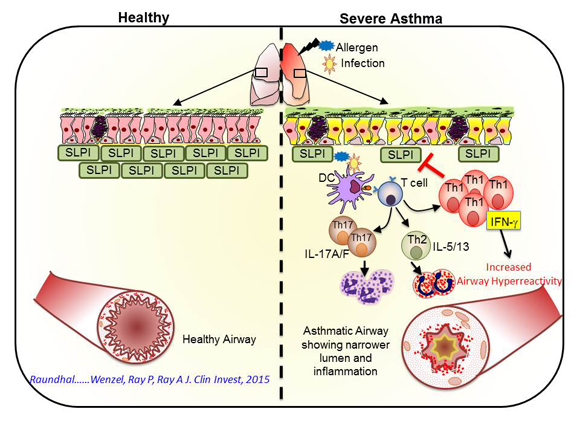