During his doctoral thesis work, Dr. Oriss studied the role of Epstein-Barr virus in post-transplant lymphoproliferative disorders. This sparked his interest in immunology, which he then pursued during two post-doctoral fellowships. During the first, he studied cytokine crossregulation between murine T helper type 1 and T helper type 2 cells. And during the second, he studied human T cell responses to autoantigens stimulated by dendritic cells in the setting of the autoimmune disease, systemic sclerosis, also commonly known as scleroderma.

Since joining PACCM, Dr. Oriss has focused on many aspects of dendritic cell biology in lung disease, particularly asthma. He developed a murine model of experimental airway inflammation utilizing direct sensitization to allergen via the airways which has facilitated the study of DC-mediated priming events in the lung-draining lymph nodes. This basic methodology has been adapted for other experimental systems by a number of others in the laboratory. He received a Dalsemer Award from the American Lung Association in 2007 to study effects of agonists of PPAR-g on DC migration in vivo, and is a co-investigator on a number of grants involving DC biology. More recently, Dr. Oriss has begun collaborative efforts with the laboratory of Sally Wenzel MD to study the basic biology of severe asthma in humans.

Dr. Oriss has a long-standing interest in flow cytometry going back to his early graduate school days. Currently, he is primarily responsible for the operation and maintenance of two flow cytometers at PACCM, a FACSCalibur analysis instrument, and a FACSAria high speed cell sorter, both from BD Biosciences Immunocytometry Systems. His expertise with flow cytometry has led to a number of collaborative efforts with investigators within, as well as outside of PACCM. 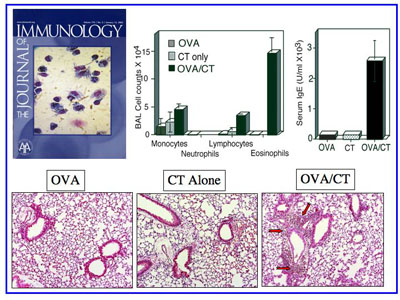 Model of experimental asthma via intranasal administration of ovalbumin plus cholera toxin (OVA/CT). Existing models of experimental asthma were inadequate to study early sensitization events since priming took place mainly by intraperitoneal injection. Immunization directly through the airways by intratracheal administration of antigen (OVA) plus adjuvant (CT) resulted in many of the hallmarks of allergic asthma, namely eosinophilia in the bronchoalveolar lavage (BAL) fluid, antigen-specific IgE in the blood, and inflammation around the airways in the lung tissue. An important aspect of the model is that T cell priming occurs in the anatomically correct area (the lung-draining lymph nodes), and that lymph node dendritic cells, shown in the Journal of Immunology cover art, bias T helper cell responses to asthma-associated Th2 type. This model serves as a basis for ongoing investigations of asthma pathogenesis.

Immunophenotyping and isolation of purified dendritic cell populations by flow cytometry. Using FACSCalibur analysis and FACSAria high-speed cell sorting instruments, dendritic cells (DCs) were identified in murine lung-draining lymph nodes based upon the expression of MHC Class II and CD11c. Additional immunophenotyping revealed that two subsets of DCs were present, plasmacytoid-like DCs (pDCs) and myeloid-like DCs (mDCs). Each of these populations can be isolated by cell sorting for additional functional analysis. Similar methodologies have been employed by the laboratory to purify a number of different types of immune system cells. 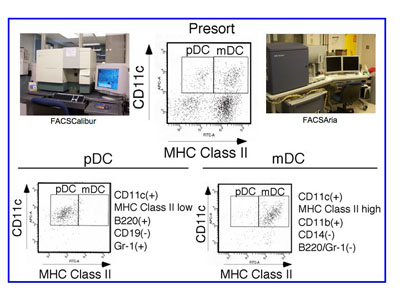 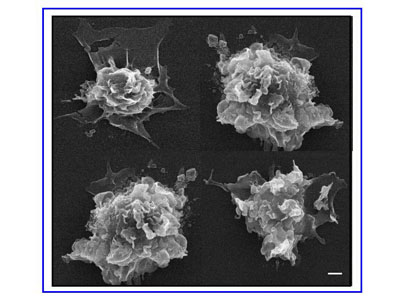