Dr. O’Donnell’s interests are in the pathophysiology of hypoxia and sleep apnea and its relationship to metabolic and cardiovascular dysfunction. His laboratory utilizes murine models of obesity and hypoxia using a variety of chronically instrumented inbred and transgenic mouse strains. In respiratory studies, he has established in the genetically obese ob/ob mouse that leptin deficiency leads to respiratory depression, and that leptin replacement can correct this respiratory depression independent of weight, food intake or metabolism. In metabolic studies, he has demonstrated that lean mice can exhibit insulin resistance and hyperlipidemia during exposure to intermittent hypoxia (simulating sleep apnea) as well as leading to a compensatory increase in pancreatic beta cell replication. More recently he has shown that long-term exposure to sustained hypoxia (simulating altitude) can lead to compensatory increases in insulin sensitivity. In cardiovascular studies, Dr. O’Donnell and colleagues have studied the impact of heart failure on disruption of sleep architecture, and examined how the upregulation of cardiac leptin signaling plays a crucial role in reducing morbidity and mortality in response to myocardial ischemia. Finally, in collaboration with Dr. Bryan McVerry, Dr. O’Donnell is studying the mechanisms underlying the development of hyperglycemia in critical illness. 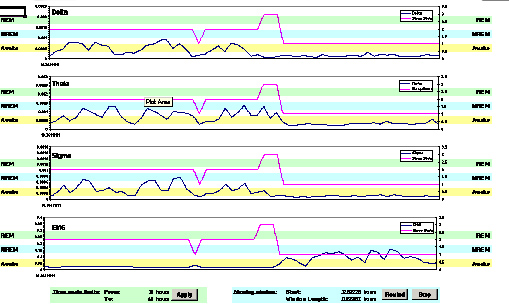 Dr. O’Donnell has developed the ability to record sleep (polysomongraphy) in mice and to score the sleep in real-time using the computer-generated algorithms shown above. Using this real-time sleep assessment it is possible to expose mice to hypoxia only during sleep and restore the animals to normal room air breathing when they arouse or wake from sleep in response to the hypoxia. As a result he can specifically model the sleep-induced hypoxia that occurs in patients experiencing obstructive sleep apnea, which is characterized by repetitive periods of airway obstruction and intermittent hypoxia during sleep. 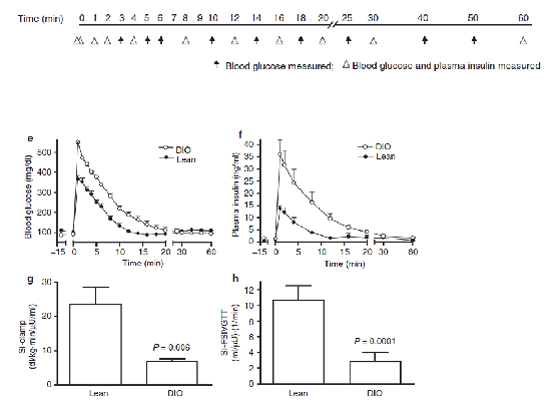 Chronic exposure to hyperglycemia is known to lead to a compensatory increase in pancreatic beta cell replication; a response can elevate circulating insulin levels and potentially lower blood glucose. Dr. O’Donnell and colleagues in the Division of Endocrinology and Metabolism have now shown that exposure to intermittent hypoxia (IH) can also produce pancreatic beta cell replication at a rate comparable to hyperglycemia, but the combination of glucose and IH (Glu + IH) was no more effective than either hyperglycemia or hypoxia alone. Since apoptosis (TUNEL (+) beta cells) was minimal during hypoxia it was concluded that IH leads to a compensatory increase in beta cell replication that mimics hyperglycemia. This finding is somewhat counterintuitive to endocrinologists who make every effort to avoid hypoxic exposure of beta cells being prepared for transplantation into diabetic patients. The O’Donnell laboratory is currently investigating the mechanisms through which IH can cause beta-cell proliferation and whether they share any common pathways with hyperglycemia-induced proliferation. 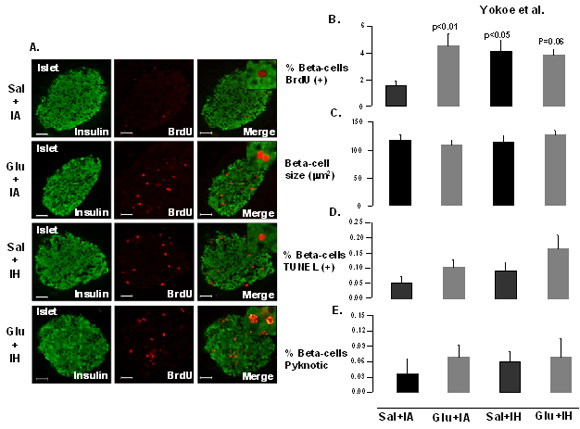 Leptin is a hormone primarily released from adipose tissue that has multiple systemic effects including suppressing appetite and increasing metabolism. However, leptin is also produced in many tissues other than the central nervous system, which have their own leptin receptor/signal transduction pathways. Dr. O’Donnell and colleagues in the Cardiovascular Institute have shown in mouse models of experimentally-induced heart failure that leptin deficiency leads to increased morbidity and mortality and that leptin administration can reverse this pathological phenotype. Moreover, the experimentally-induced heart failure causes increased production of leptin in cardiac myocytes and the translocation of leptin receptors to the cell membrane of myocytes. The figure above shows leptin receptors (red) in cardiac myocytes (green nuclei) in patients with heart failure (right panel) and control subjects without heart failure (left panel). The same pattern of response was seen in human heart failure – activation of leptin signaling pathways in cardiac myocytes – as in the murine model of heart failure. Dr. O’Donnell and colleagues are currently exploring the hypothesis that leptin may act as a metabolic switch in ischemic cardiac tissue to optimize the fuel source needed to maintain viability of the myocyte.