The focus of Dr. Kass’ lab is Idiopathic Pulmonary Fibrosis (IPF). It is a progressive, scarring of the alveolar parenchyma that ultimately leads to respiratory failure and death. Pathologically, this disease is characterized by the unremitting accumulation of fibroblasts. These are the cells responsible for the deposition of extracellular matrix in pulmonary fibrosis.

To gain insight into the pathogenesis of IPF, Dr. Kass’ colleagues performed gene expression profiling of IPF lungs compared to normal controls. Dr. Kass has focused on the genes that exhibited increased expression in IPF under the rationale that genes that are highly expressed in IPF likely contribute to the development of pulmonary fibrosis. Specifically, the lab has focused on MetAP2 and Twist1.

Dr. Kass made the novel insight that the MetAP2 expression is necessary for fibroblast proliferation in vitro and that inhibition of MetAP2 with the drug fumagillin suppresses bleomycin-induced pulmonary fibrosis in mice by selectively decreasing the proliferation of fibroblasts in the lung.  Upcoming works include testing fumagillin in animal models of pulmonary hypertension.

The figure belows shows the selective reduction in the number of myofibroblasts from the lungs of animals injured with bleomycin and treated with fumagillin compared to the vehicle control: 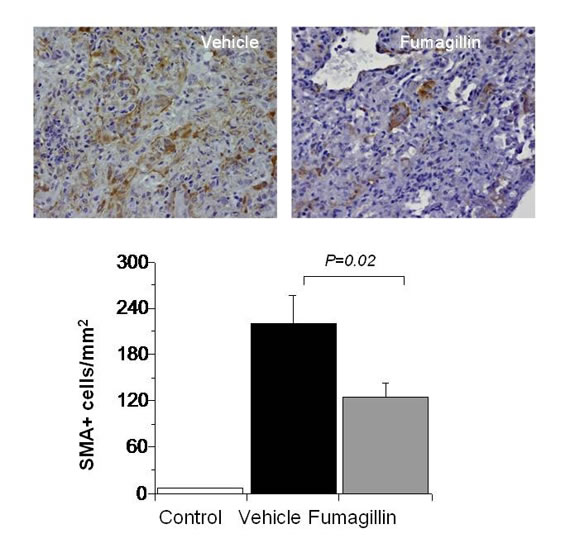 Dr. Kass’ lab currently studies Twist1, a transcription factor that has been implicated in resistance of tumors to chemotherapy and in promoting metastasis. Work performed by Dr. Robert Bridges in Dr. Greenberg’s lab showed that Twist1 expression in fibroblasts is induced by pro-fibrotic growth factors and that  Twist1 expression is critical to prevent apoptosis in lung fibroblasts exposed to pro-apoptotic stimuli common to IPF lungs. Dr. Kass is currently characterizing a double transgenic mouse engineered to delete Twist1 specifically in fibroblasts. 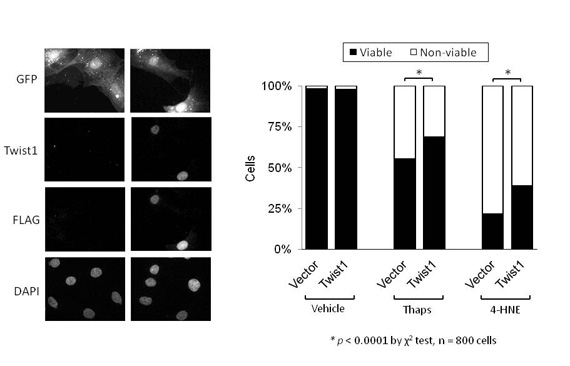 The ultimate goal of Dr. Kass’ work is to develop novel therapeutic strategies to treat IPF.