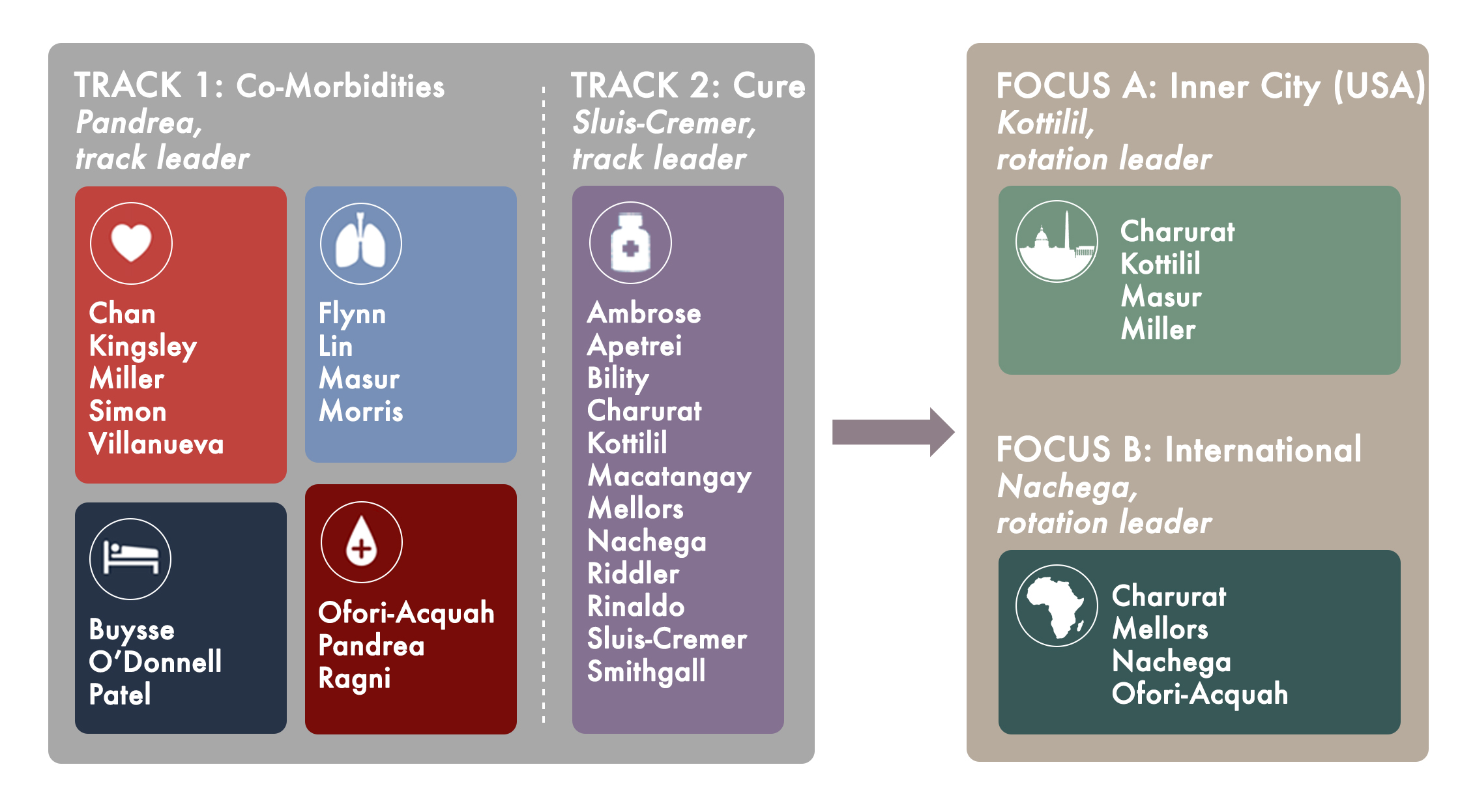 With the reduction in opportunistic infections and AIDS-associated diagnoses in the antiretroviral therapy era, Heart, Lung, Blood, and Sleep (HLBS) Comorbidities are of increasing importance in HIV+ populations. Up to 22% of all deaths in HIV are now due to cardiovascular disease, and this figure is predicted to increase as the HIV population ages.  Other cardiac diseases such as heart failure with preserved ejection fraction (HF-pEF) and pulmonary hypertension also contribute to morbidity and mortality in this population.

Additionally, chronic respiratory symptoms are remarkably common among HIV+ persons, reported in greater than 40% of participants in cohort studies. And, HIV infection is an independent risk factor for several clinically important respiratory diseases, including COPD. These conditions are associated with decreased health-associated quality of life, increased healthcare costs, and increased mortality. Standard COPD treatments such as inhaled corticosteroids may have significant side effects in HIV. Even smoking cessation is not an absolute solution as COPD often progresses despite quitting, and many HIV+ individuals who have never smoked have COPD-like pulmonary dysfunction.

Sleep and hematological complications are also important, but relatively understudied. Obstructive sleep apnea (OSA), a chronic disease characterized by repetitive narrowing and closure of the upper airway during sleep, may result in heightened inflammation and an increased risk for cardiovascular disease or other comorbidities. HIV and antiretroviral therapy may also contribute to upper airway structural and functional abnormalities that could lead to OSA. Inflammation may also lead to an increased risk of thrombosis, and markers of coagulation remain elevated even in treated HIV+ individuals and predict morbidity.

The degree to which HLBS comorbidities are driven by specific HIV-related factors versus shared confounding risks remains unclear, but broad unifying syndromes inherent to acute and chronic HIV infection have been proposed as pathophysiologic actors for HLBS co-morbidities. These include chronic inflammation resulting from lymphocyte activation, macrophage/monocyte activation, endothelial dysfunction, microbial translocation, viral co-infection, changes in the host microbiome, and immune dysregulation. As HLBS co-morbidities share common underlying pathways, they frequently occur in the same individuals and may also be related to other non-AIDS associated co-morbidities.

Although antiretroviral therapy can suppress HIV to undetectable levels in blood and prevent AIDS-related illness, it cannot clear the virus from the host despite years of virologic suppression. Quantitative real-time PCR (qRT-PCR) assays with single copy sensitivity have revealed persistent HIV viremia in the majority of successfully treated HIV+ individuals. Antiretroviral therapy interruption almost always leads within weeks to a rebound in plasma viremia from unknown sources. Equally important is that even with declining prices and better access to antiretroviral therapy, the cost of providing every HIV+ person with life-long therapy will drain public health systems, especially in developing countries. It is critical that research be devoted to filling important knowledge gaps in factors that drive persistent proviral expression, clonal expansion, and viral latency, and to evaluating strategies that can lead to long-lasting HIV remission without antiretroviral therapy, i.e., a functional cure of HIV. Our Cure training track will span multiple aspects of Cure research and synergize with the diverse expertise of Mentors. It includes research techniques ranging from in vitro assays and molecular technique to animal models and clinical trials. The HIV Cure Track capitalizes on the hallmark research on curing HIV led by Dr. John Mellors, Dr. Nic Sluis-Cremer, and the Pitt research group.

Relationships between Comorbidities and Cure

Developing a cure for HIV could address not only the public health challenge of providing lifelong antiretroviral therapy to all infected individuals, but also the non-AIDS associated complications of chronic HIV infection. Even with suppressive antiretroviral therapy, immune dysfunction persists and levels of immune activation and inflammation rarely return to those in healthy HIV-uninfected individuals. This immune dysfunction has been associated with greater risk of chronic diseases, such as CVD and COPD. Thus, study of HIV Co-morbidities and Cure will train Scholars, lead to new discoveries, and improve clinical care.