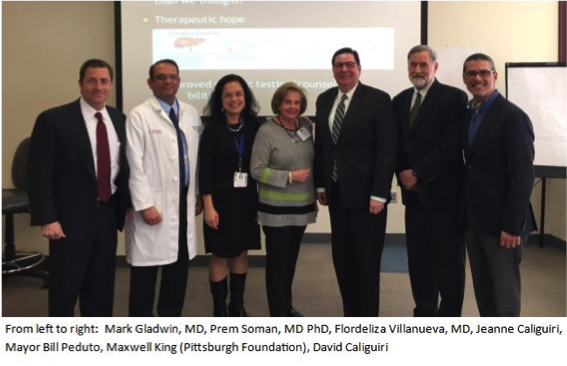 The Pittsburgh Foundation and the University of Pittsburgh have agreed to fund the Richard S. Caliguiri Endowed Chair in Amyloidosis and Heart Failure. The endowment will allow the VMI to recruit a distinguished amyloidosis investigator who will lead basic science research efforts focused on amyloidosis causes and interventions.

Initial funding for the chair will come from two funds within the Pittsburgh Foundation:  the Richard S. Caliguiri Fund and the Simeon M. and Katherine Reed Jones Fund.  The Caliguiri Fund was established by the family of the late Richard S. Caliguiri who served as Pittsburgh’s mayor from 1977 until 1988 when he died of amyloidosis at the age of 56.  It is very important to the Caliguiri family that all funds raised go to research conducted in Pittsburgh.  Proceeds from the annual City of Pittsburgh Great Race also benefit the Caliguiri fund.  The Simeon M. and Katherine Reed Jones Fund, which supports research for heart disease, will also contribute a significant amount of money to the endowed chair.  Once annual donations from the two funds total $1 million, Pitt will match with a $1 million contribution.

To celebrate the establishment of the chair and learn more about the research capabilities at Pitt, the Caliguiri family and current Pittsburgh mayor Bill Peduto toured the VMI and met with researchers and physicians in March.  Dr. Gladwin led the tour and explained the how the incoming amyloidosis investigator will benefit from Pitt’s strong, collaborative heart and vascular research environment and UPMC’s technology to perform advanced, non-invasive imaging scans that show build-up of amyloid proteins in the heart.