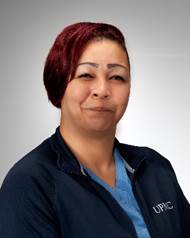 Denean Wright, LPN, OP, has received UPMC’s Award for Commitment and Excellence in Service (ACES). The ACES Award honors staff whose everyday actions, and in some instances, personal acts of courage and compassion exceed the high level of service that the community has come to expect from UPMC. Each year, less than one percent of UPMC staff from across the health system receives this honor.

Denean has been a member of the ID Division for the past four years serving as a Licensed Practical Nurse for Outpatients (LPN, OP) with the UPMC Center for Care of Infectious Diseases. Additionally, Denean serves as a staff member with the UPMC Seneca Manor Assisted Living residence. She is passionate about her work and is extremely dedicated to patients and residents.

Denean has been especially recognized for her devotion to her craft. She fosters close relationships with the residents at Seneca Manor. On several occasions residents shared with Denean their sadness and disappointment with not having grandchildren. This was especially difficult during Grandparents’ Day activities in the fall. One such activity involved families having the opportunity to purchase flowers for the “garden” with grandchildren’s names listed on the petals. Denean purchased flowers and butterflies for residents that did not have their own grandchildren. The residents were teary-eyed by her kindness and thoughtfulness as were staff.

Denean demonstrates a caring and cooperative spirit with others and serves as a role model for students, staff, and faculty. She has been described by colleagues as always bringing laughter and happy vibrations to the workplace! We are fortunate to have Denean as a member of our team.

Congratulations Denean on this well-deserved honor. Thank you for your hard work and dedication!