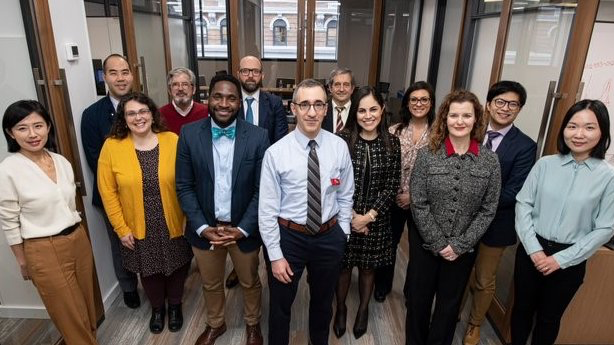 Since its inception in 2013, the Center for Pharmaceutical Policy and Prescribing (CP3) has aimed to improve the quality, safety, and efficiency of medication use through multidisciplinary collaborations. With rising concerns over the opioid epidemic, two new collaborations have emerged aimed at tackling some of the toughest questions to address patient risk and prescribing practices. The first is a collaboration with the State’s Department of Health to add advanced analytics to its Overdose Data to Action (OD2A) response. The second project is a continuation of funding from the Richard King Mellon Foundation to develop and then implement machine learning risk prediction models to help improve opioid overdose prevention and treatment.

Like most states, Pennsylvania has a Prescription Drug Monitoring Program (PDMP). When controlled drugs are prescribed, they must be entered into a statewide database that tracks prescriptions to ensure that the drugs are being prescribed appropriately. These data provide a comprehensive look at prescribing practices in Pennsylvania.

Recently, the CDC established the Overdose Data to Action (OD2A) program to “increase the timeliness and comprehensiveness of data and to use those data to inform public health response and prevention activities.” When the Pennsylvania (PA) Department of Health was awarded a grant through this CDC program, the University of Pittsburgh and CP3 were natural choices for collaborations to use the PDMP data to find ways to reduce overdose deaths.

The University’s work for the Department of Health is a joint effort of the Graduate School of Public Health and CP3. In the Department of Biostatistics, Dr. Jeanine Buchanich and her team are tasked with evaluating activities associated with OD2A, including educating prescribers on safe prescribing practices. The team is multidisciplinary with expertise in overdose morbidity and mortality and in evaluation, making them well suited for these activities.

“In collaboration with the state and local health departments, our evaluation of OD2A activities will inform policy and decision making to reduce non-fatal and fatal opioid overdoses,” said Dr. Buchanich. “It is exciting to be able to use a data-driven approach to drive public health interventions. This will be the richest and largest compilation of opioid-related data in the state’s history.”

In the second component of the University’s response, CP3 was asked to lead the advanced analytics component of the Department of Health’s OD2A response, given its experience in using predictive modeling techniques to address the opioid epidemic guided by the leadership of Director Dr. Walid Gellad.

“Our goal in applying machine learning to opioid data has always been to find ways to use these new techniques in real-life situations to help make better decisions and better policies around the epidemic,” said Dr. Gellad.

Over the next few years, CP3 will provide the Department of Health analyses to help optimize its prevention activities around opioids.

CP3 has already started close collaboration with the PDMP and PA Department of Health, with monthly calls and reports. CP3 Program Manager Dr. Courtney Kuza expressed excitement at the partnership and the opportunity to work with the latest data. “Our analyses will be much more relevant because we’re in close communication with the Department, receiving new data quarterly,” said Dr. Kuza. “Since we have done predictive analytics with other data sets, this partnership was a natural fit for us. Our goal is simply to help the state augment its abilities to improve public health for members of our community.” 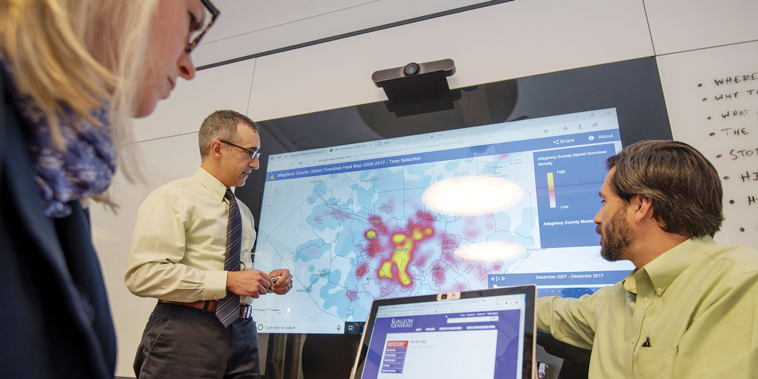 Working with a grant from the Richard King Mellon Foundation over the past two years, CP3 has been developing opioid overdose risk prediction models in a unique partnership with the Allegheny County Department of Human Services. CP3 just received an additional 2 years of funding from the Foundation to put this model into action in Allegheny County. This work builds on funding from the National Institute of Health that allowed the CP3 team to publish the first version of a machine learning model for predicting risk last year in JAMA Network Open and a second model recently in PLOS One.

The Allegheny County Data Warehouse integrates data from a variety of public systems including Medicaid, courts, county jail, child welfare, aging services, and many other systems. Using those data, CP3 developed an algorithm predicting overdose risk for county residents enrolled in Medicaid who also encountered these various public systems. The purpose of these algorithms is to help public health practitioners in the county in addressing the epidemic. The additional funding from the Richard King Mellon Foundation will enable CP3 to take these algorithms into the real world to understand how they can work to improve care for those people impacted by the opioid epidemic. CP3 is exploring which community partners might be the best fit for implementing the models, a discussion started over the last year.

“Supporting the scientific community in its efforts to combat the COVID-19 pandemic has rightly been all of our focus,” said Foundation Director Sam Reiman. “But the pandemic has made the human impact of opioid overdoses even more acute. And the tragedy of the pandemic would be greater still if we allowed it to slow our momentum combatting this ongoing public-health imperative.”

The collaboration with the county began with CP3 Co-Director Dr. Julie Donohue and the Graduate School of Public Health to harness the analytical skills of the department, supported by former Dean Donald Burke’s focus on overdose death as a public health priority. Funding from Richard King Mellon Foundation, paired with CP3’s prior work in predictive analytics, presented a unique opportunity to develop this project among the Department of Human Services, Allegheny County Health Department, and University of Pittsburgh.

CP3 collaborator Dr. Eric Hulsey has been contributing to these projects for several years, beginning while he worked at the Allegheny County Department of Human Services. Dr. Hulsey now works at Vital Strategies on the Drug Use Epidemiology and Data public health program.

“It is not surprising that this is coming out of Pittsburgh, a region both hard hit by the overdose epidemic and emerging as a technology hub,” said Dr. Hulsey.

Across all possible interventions, the goal remains the same: Using this tool as a more accurate way of assessing risk and then helping agencies to triage limited resources. To develop and deploy the intervention in a fair and equitable manner, CP3 will hold meetings with community stakeholders to ensure that any interventions do not unfairly target groups of people or exacerbate existing disparities.

“Our goal is to turn the science of risk prediction in the opioid epidemic into action, making sure that the action helps decision makers and communities reach their goals of improving health and welfare,” said Dr. Gellad.  “We need community input to do this.”

The project will have multiple advisory boards, including one on ethics, one on technical aspects, and one on implementation. Non-academic community stakeholders will be identified as those who use services or might be impacted by algorithms. Dr. Megan Hamm will lead qualitative analyses to engage community members and review feedback.

While there are other places and groups attempting to predict overdoses as well, some of them depend on only one source of records—typically, healthcare records. “What is unique about our approach is that we have, perhaps, the most integrated health and non-health sector data to include in our risk models,” said Dr. Hulsey.

Allegheny County is unique in its existing culture of collaboration between its court systems, other county government departments, universities, and foundations and philanthropy, leading to this ideal opportunity to pioneer innovative approaches to combatting overdose.

“CP3 is the ideal group for this work because we have the expertise in machine learning, but also strong roots in community and a great team that knows implementation science,” said Dr. Kuza.

“The Foundation is impressed with CP3’s work to reduce opioid overdoses over the last two years and we are hopeful that our ongoing commitment will enable CP3 to do more good work to save lives,” said Mr. Reiman.