Dr. Ray’s research interest lies in the immunoregulatory mechanisms of lung inflammation as they relate to disease inception and resolution. Dr. Ray pioneered the development of inducible cell-specific transgenic mice in the early years of his career at Yale University and using this system showed an important role for the growth factor KGF in protection from lung epithelial cell death during lung injury.  His research in the area of innate immune mechanisms regulating adaptive immunity led to the identification of a central role of the c-kit-PI3 kinase axis in promoting IL-6 but inhibiting IL-12 production in dendritic cells resulting in Th17 and Th2 differentiation and development of the asthma phenotype in an animal model.  This work was chosen for the Year in Immunology 2010 publication of the New York Academy of Sciences.

Ongoing research in Dr. Ray’s laboratory encompasses two major areas, which are studies of innate immune mechanisms that mediate resolution of lung inflammation and protect from lung injury after pneumonia and the impact of early life viral infections on immunoregulatory mechanisms in the lung.  In collaborative studies between his lab and that of Dr. Anuradha Ray, for the first time a pathogen, respiratory syncytial virus, was shown to disable Tregs in early life thereby compromising immune tolerance and increasing the risk for asthma in later life.  He is particularly interested in differences in host defense mechanisms between newborns and older adults that causes increased susceptibility to respiratory viruses in early rather than in later life. His work has also for the first time identified the development of myeloid-derived suppressor cells (MDSCs) in the lung in response to bacterial infection and concomitant TLR/MyD88 signaling that play an important role in resolution of bacterial pneumonia.  These studies utilize animal models of disease and human samples which are analyzed using immunological, molecular, biochemical and imaging techniques.  Dr. Ray’s research has been continuously funded by grants from the American Lung Association and the NIH. 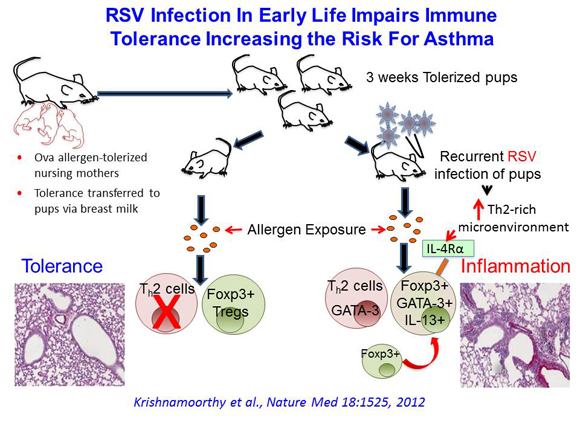 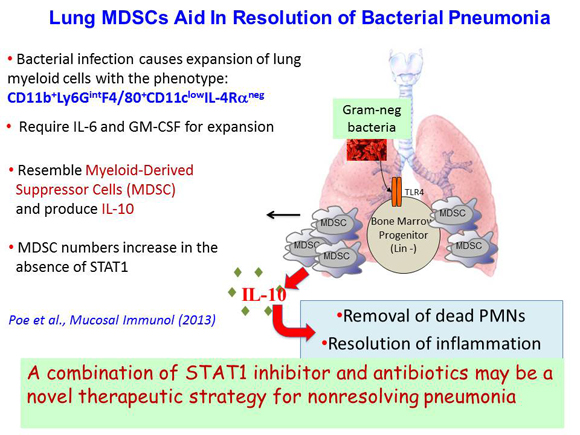