The Transplantation Immunology Program is dedicated to a greater understanding of the basic biology of transplantation of the lung allograft. This multidisciplinary program incorporates surgical, immunologic, and medical expertise in the care and research of patients with end-stage lung disease who undergo lung transplantation. Our program also takes great pride in hypothesis testing through novel laboratory study of human samples, and randomized, placebo-controlled clinical trials.

Dr. Joseph Pilewski’s research centers of Cystic Fibrosis and other suppurative lung diseases, both pre- and post-transplant. He works towards improving post-transplant outcomes particularly in this patient population, including in patients who are colonized with drug resistant organisms. He also serves as principal  investigator of a lung tissue bank that makes explanted lung samples available to investigators studying Cystic Fibrosis and other end stage lung diseases. Lastly, he is collaborating with Dr. Andrej Petrov on studies of hypogammaglobulinemia in lung transplant recipients.

Dr. Bruce Johnson has been a leader in clinical therapeutic studies in drugs to prevent rejection. He helped develop the first inhaled anti-rejection medication, inhaled cyclosporine, a drug taken from the bench to the bedside at the University of Pittsburgh (See The Cyclosporine Story), and is co-principal investigator on the current Phase III Multicenter randomized control trial entitled “A Multi-Center, Randomized, Controlled Study to Demonstrate the Efficacy and Safety of Cyclosporine Inhalation Solution (CIS) in Improving Bronchiolitis Obliterans Syndrome-Free Survival Following Lung Transplantation.” Dr. Johnson also performed a phase IV trial examining mycophenolic sodium (Myfortic) versus mycophenolate mofetil (Cellcept), and found that Myfortic was associated with a decreased incidence of nausea and upper GI distress. Dr. Johnson started his transplant clinical research career assisting Dr. Steve Duncan in the first prospective, randomized controlled drug treatment trial ever in the history of lung transplantation. Finally, Drs. Johnson and Duncan were the first to report recurrence of a pre-transplant disease in lung allografts and the first to report an association between statin use and improved survival in lung transplant recipients. 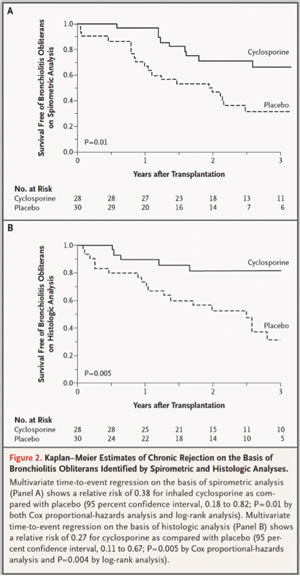 The University of Pittsburgh takes pride in its bench-to-bedside development of inhaled cyclosporine in the prevention of chronic rejection. This idea originated with Dr. Bartley Griffith, previous director of heart and lung transplantation who performed the first lung transplant at UPMC. While preclinical work was done in his lab at the University of Pittsburgh in a rat model, ultimately this drug was carried forth in collaboration with Dr. Aldo Iocono, Bruce Johnson, James Dauber, Tim Corcoran, Steve Duncan, Ken McCurry, and others. These investigators have hypothesized that higher concentrations of the drug will enter the transplanted lung by aerosol inhalation than could be achieved by the more traditional oral route, thereby facilitating better control of rejection while minimizing drug toxicity.

Early data from a randomized, placebo-controlled trial at the University of Pittsburgh showed that inhaled cyclosporine improved chronic rejection free survival five years after lung transplant from 50% to 89%.  The trial (Iacono AT et al, NEJM 2006) was and remains the only one that has ever improved survival after lung transplantation. The investigators are currently completing a multicenter Phase III randomized clinical trial, with 278 subjects enrolled from 20 transplant centers in North America. Late phase trials are underway using aerosol cyclosporine as rescue to treat patients with refractory acute rejection that failed to respond to all forms of conventional immunosuppression.

At the University of Pittsburgh, we hope to lead the transplant community in developing and practicing evidence based medicine, and the aerosolized cyclosporine story is an important example of that. With continued leadership and participation in clinical trials, we aim to continue to advance the field of lung transplantation and improve future outcomes.